Within the RUR rankings system all higher education institutions are classified along three dimensions:

The world of higher education is diverse and, to emphasize this diversity, we have introduced a system of the so-called Leagues. Each of the approximately 20,000 universities of the world is unique: one is a global research hub that brings together leading scientists in one place, another focuses on training staff for a necessity of a particular region within the country, while the third aims for teaching middle managers of global companies, to whom the university is an additional boost for career development.

Despite of the variety, the universities are united by their commitment to excellence. In order to emphasize this commitment we have introduced a system of the Leagues, resembling the Olympic medals system. 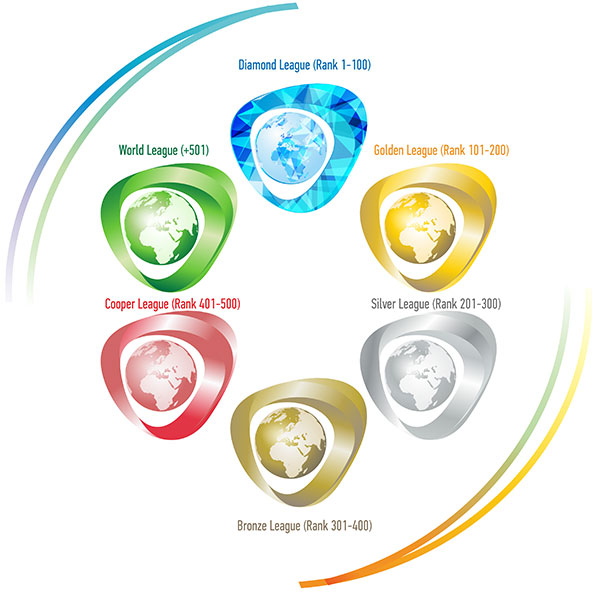 Each league embraces a hundred of universities (1st, 2nd hundred and so on):

We note that our task is to show the diversity of higher education institutions on the basis of a simple statistical method of distributing objects to clusters. Leagues represent the universities’ desire for progress and perfection.

The Diamond League shows professionalism and the highest quality of both research and education. Universities presented in the Diamond League demonstrated themselves as world’s centers of excellence and competence. In the league one can find both centuries-old universities, whose history counts more than 500 years, and young participants, who barely reached the 50 year mark.

To get into the Diamond League universities should obtain equally excellent education and research scores, have a high level of internationalization and demonstrate strong financial sustainability.

The noble metal is for the RUR members, who got the second place in the league distribution.

Universities included in the Golden league are equally strong both in education and teaching fields, with a focus on one of them. And are equally high internationalized and financially sound.

The third step in the RUR system is the Silver league. Universities included in this league tend to have a pronounced component: either research or teaching.

The 5th league is copper. It completes the series of the so-called “colored” or “metal” leagues. Higher education institutions included in the Copper League close the prestigious top-500 in RUR Rankings. Universities from this league can be considered as elite, because they are in the top 2-2.5% of world universities.

Several groups of measurement and individual rankings exist within the RUR ranking. In addition to the Overall ranking, higher education institutions are evaluated by four areas:

In contrast to the overall ranking, the single-area rankings allow to reveal university’s strengths and weaknesses in certain fields, not just in general.

University rankings serve a variety of functions, one of the most common is being a source of information. Overall rankings give us a picture that can be used for comparing whole universities. Subject rankings allow comparing university activity in a specific or few specific areas. If one is interested in analysing university by specific subject areas throughout the world, Subject rankings are an ideal way to do so. Using our system of indicators, users will be able to compare programs in details. These comparisons will allow users to obtain subject-specific information.

The complex and multi-variable nature of worldwide university rankings demands a multidimensional view. Rankings provide tools for analysing universities to get a clearer picture of university activity throughout the world. RUR Rankings Agency believes that its objective system has made that picture a bit clearer for both academic community and students.